Here’s a quick hack I did a while ago to my VS200 food sealer. 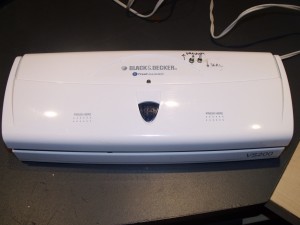 I bought this some years ago to use for sealing up meats and such after a trip to a club store. It was cheap, but it had one problem: To seal, it went through a pre-programmed routine. This was pull a vacuum until a vacuum switch trips, continue pulling vacuum for about 30 seconds, and then seal for about 9 seconds. This meant that if the bag was small and evacuated quickly, or, more importantly, if I just wanted to make a new bag up, I had to go through the entire cycle. Waste of time, especially if I have to seal 30 or so bags or make up a bunch of new bags. More expensive units have seal-only functions, but I didn’t want to spend the money for that when I bought mine.

So, I flipped it over, removed the Phillips screws, destroyed the sunk security screw, and gained access to the innards. Behold, a PIC microcontroller, power supply, vacuum switch, and associated electronics goodies. 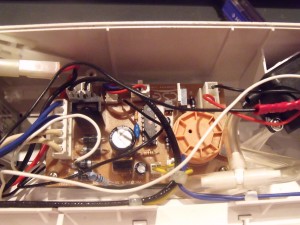 I was going to remove the PIC and replace it with an Arduino or just reprogram it, but I figured I could get what I want done just by adding two switches. One would activate the sealer heater to seal the bag, and one would enable/disable the vacuum pump. By doing this, I could both seal bags as soon as they were completely evacuated and make up new bags without having to go through the whole cycle. That’s 10 seconds to make up a bag vs. 40 seconds.

Poking around, I saw that the heater is isolated from the circuit with an opto-isolator. I simply wired a 5V signal from the 7805 regulator through a switch to the isolator to turn on the sealer heater when I want.

Here’s my connection to the opto-isolator. 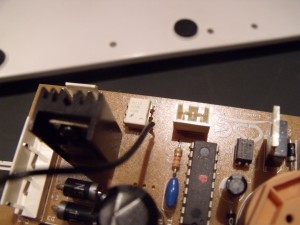 Here’s where I’m pulling 5V from the 7805. I just wired in a resistor to limit current draw.

That’s it. When I want to make a bag, I simply place the plastic instead the unit, push down on the bar to turn it on, and hold down the switch to turn the heater on. I place the vacuum switch in the “off” position to disable the vacuum pump. The heater switch is a momentary switch so I don’t accidentally leave it on.

When I want to seal a bag, I put the vacuum switch in the on position and activate the sealer heater when I want. One nice thing about this is I can go longer on the heater if there is a lot of moisture coming from the food. Before I did this, I would sometimes have to run the cycle twice to get it to seal.

Before this hack, it would take me almost over an hour to seal up the food, especially if I needed to make up new bags. Now I get it done in the half the time. Plus, I only spent $40 on the sealer, not $100+ for fancier ones that have the seal-only function.

Finally, security screws are evil. Not only did they have one for the sealer case, they put one on the circuit board to limit access. 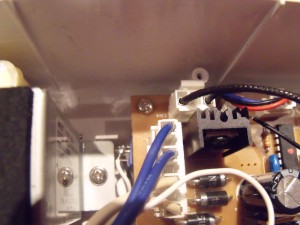 Not that it stopped me…..